Mind the Gap (2003-2005): George founded the non-partisan group 'Mind the Gap!' to explore the causes of people's disillusionment with mainstream politics.

Positive Politics! (2005 General Election): Having founded "Positive Politics!" in 2004 George stood on that ticket in Stevenage in 2005 and nearly delivered the shock result of the night with a massive swing to nearly unseat the Labour incumbent Barbara Follett.  At that year's Conference George was invited by the Party's Candidates Department to present his proposals for reforming the way Candidates campaign - here's his film and speech...

The Norfolk Way (2007-present): George founded The Norfolk Way in 2007 as an independent campaign organisation to act as a catalyst for positive, sustainable and entrepreneurial change in rural Norfolk.

It Starts Here (2010 General Election): George ran for the seat of Mid Norfolk with the campaign ‘It Starts Here’, combining a fresh and positive approach to politics based on grassroots action. 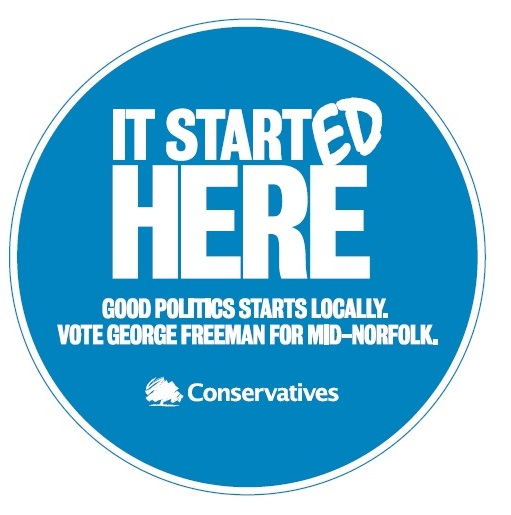 It Started Here (2015 and 2017 General Elections): Following five years as MP for Mid Norfolk, George launched the campaign ‘It Started Here’ in 2015 and again in 2017, campaigning on planning, housing and infrastructure, supporting our NHS, care and mental health services, and better schools and skills training for all.